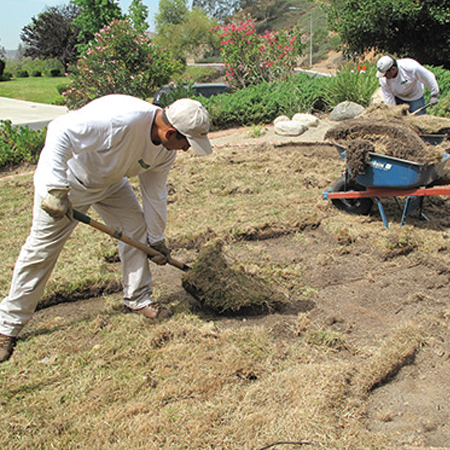 Before I knew it, the sinister forces of EasyTurf were back at the gates of my owners’ home, waking me from my comfortable slumber in the doghouse. They piled out of their trucks like Allied forces storming the beaches of Normandy, armed with artificial grass, and prepared to breach the retaining white picket fence. This was my only line of defense, so I bounded over to it in Beethovenian fashion and began to bark like my life depended on it. It did.

Luckily, the neighbors heard my plight and began to wake up and look across the street. But, like typical braindead humans, they didn’t understand what was happening and only shouted back, “Shut that mutt up!” A French Bulldog on his walk went by the gate and I pleaded with him to help, but he simply muttered, “Quoi?” and continued walking. The other neighborhood dogs were still at the beach. I was on my own: a war of fake grass and dogs.

With the enemy now inside the gates, I went on the defensive. I’m not proud of it, but I ended up cowering in the bushes while the workers began to tear up my beloved lawn. Had my owners betrayed me and revealed the location of my bone collection? Beneath that thin veneer of green grass lay a proverbial goldmine of buried treasure. When they had torn it all up, they got more than they bargained for, finding the neighbors’ prized silver collection, a painting of some poppy flowers by van Gogh that I sorta liked, and a 1970 Plymouth Barracuda. Suddenly the yard had been transformed into a Mad Max-like apocalyptic wasteland.

Once the workers had dealt with all of the stolen goods and the news reporters had left, they located all the irrigation and electrical lines in the yard. They capped off and removed the unwanted lines, somehow managing to avoid being injured by the landmines I had disguised as sprinklers. As every step of my plan collapsed, I hunkered down in the bushes and prayed for a miracle. What was left of my yard was slowly carried away, never to be seen again.